Concept: Hand painting patterns is like going to happy place for me. I can’t exactly describe what patterns are appealing to me but I am highly selective about patterns I wear or put in my house. These patterns are all variations inspired by found patterns, modified, sketched, and applied to beads and objects. I make the Pattern sheets to document the patterns before I sell the beads and objects.

Form: More little cups and vessels! I don’t throw on the wheel so all of the objects and vessels are hand built. Everything starts as a pile, gets mowed flat, cut into shapes and and becomes something to drink from or eat off of. That circumference stuff I sort of learned in geometry is totally helpful in making cups. Who knew? 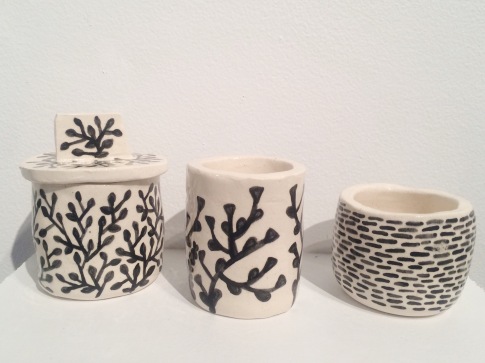 8 Rickey Loves Pizza More than Me

Concept: I wanted to make a little head and really like looking at Rickey, This was made when he still had a little ‘stache. I really love the picture of Rickey with Rickey. A large papermache pizza I saw recently at the Calvin 50 year exhibition placed across the room from a Conrad Bakker book may have inspired this piece. Also Rickey really does love Pizza. Like a whole lot.

9 This is Not a Unicorn

Concept: People love to offhandedly make suggestions to artists about what they should make work about. After learning I made a ceramic wall mounted horse Rickey said he looked like he should be saying “Hey, Hay”  So he is.

Form: I think the horse is a little lumpy and looks like a unicorn. Damn that long ear.

Concept: Some times you just think about sex, and cigarettes, and sex and cigarettes and patterns. Because that is what you think about. But it didn’t seem right to mix it in with all those thoughts about being a better person. So these guys became a little island of naughty, and seriously, Mom, I really don’t smoke.

Form: I really like the washy black thought bubble. I think that needs to be something. Also i have started thinking about the bubbles themselves as a pattern. I see a cup pattern in the near future.

Concept: If I had a few more weeks this was going to be the first in a series of tornado pieces. Tornado fear is the worst fear, my next step is to make it into a necklace.

Form: these guys got super warped in the kiln, I have a bit to learn about flat construction in layers. I really love the blue green stain under the white glaze. It’s pretty.